She is strongest when she is nurturing those she loves.

Her form just a small portion of her delicate allurement. It is her soul where her greatest beauty lies. While young, she is not unaccustomed to hardship. Yet she does not cower at her moments of weakness. There have been times she has made tragic mistakes that have harmed her—weakened her. Yet she rises from the brokenness, stronger. She bears the burden of rising up while under the weight of the lack forgiveness, judgement and criticism of not only those she communes with, but, like most women, with the judgement of herself, the parts of her that make up her whole. The weight sculpting her, sharpening her, cutting her muscles. Muscles that will be needed to fight through the mistakes she is yet to make.

In her youth, she is blamed for her conception. Ridiculed as a bastard child formed in rebellion. Expected to be all things to all people, she is unable to be fully who she is meant to be as she is pulled in the directions of the current whims of an electorate. Unable to set boundaries for herself without being called selfish. She pours out until she is empty and then, is criticized for not being full.

Like most women, she is meant to multitask.  As the motherland, she feeds, clothes, and tends to her children. Never with enough food. Never with enough garments. Never with the right level of care. The publishing houses that dwell in her borders insist that Women must take care of themselves first in order to take care of others. But not her. She is the exception. She is the breast of a thousand hungry babies demanding first milk. And if she was a good mother, she would be able to make homemade food from ashes.

Yet her story is not pitiable. She is beloved. While her strength makes her envied and beguiled, it is the reason that when there is a need, she is the first turned to. She is hated because she is needed and loved because she shows up even in the hate. She strives to help. She strives to give. Her help at times faulty. Like most women, she tries. She at times fails. Yet, she tries. A middle-aged mother, growing wiser. Her children indifferent to her while dependent on her provision. But she is loved. And she is strong enough to see the love amid the rolling eyes and slamming doors. Like most women, she is able to translate the language of love from the whispered thank you’s that scurry in the midst of screeching blame. A mother to warring siblings who both expect her to be on their side. And to be the best mother she can be, she must be judicious to not take sides in the war, but instead,  be bigger than the current dissention.

On this day, her birthday, the truth of her beauty, both form and soul, is remembered.  Sparklers burn in celebration for all that she has been, is and will become. Her goodness confirmed. Her room for growth acknowledged. The beloved mother celebrated, as she should be. From coast to coast, her children view her with fresh eyes, if only for a day. And like most women, she sits back and delights in the celebrations of her children. For it is in their happiness, she finds her joy.

“And where is that band who so vaultingly swore

That the havoc of war and the battle’s confusion,

A home and a country should leave us no more!

Their blood has washed out their foul footsteps’ pollution.

No refuge could save the hireling and slave

From the terror of flight, or the gloom of the grave:

And the star-spangled banner in triumph doth wave

O’er the land of the free and the home of the brave!

Oh! thus be it ever, when freemen shall stand

Between their loved home and the war’s desolation!

Blest with victory and peace, may the heav’n rescued land

Praise the Power that hath made and preserved us a nation.

Then conquer we must, when our cause it is just,

And this be our motto, “In God is our trust.”

And the star-spangled banner in triumph shall wave

O’er the land of the free and the home of the brave!” 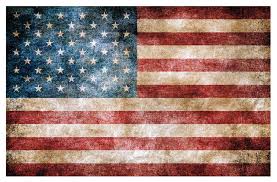