“I regard the theatre as the greatest of all art forms, the most immediate way in which a human being can share with another the sense of what it is to be a human being.”

It was the fourth day of camp, but the first run through of “Mother Duck and the Golden Goose,” the show to be performed the following night as a part of the Special Stages Theatre Therapy for Students on the Autism Spectrum hosted by Public Theatre of Kentucky.  The week long camp, offered during Spring Break, is an idea realized by Meaghan Ritchie, a trained special education professional. Ritchie, who grew up a theater kid, believes in the power of the stage for children who are living on the spectrum. Studies have found theatre may be a great tool to help children with autism improve their social competencies. As audience members, theaters across the nation, including on Broadway, have improved access to theatre arts for members of the ASD community by offering altered performances. However, at Public Theatre of Kentucky, the campers were not there to see a show, but instead, be the show.

Under specially lit lights, Bobby moved to center stage to begin his monologue as Ginger, the talking, running cookie. Having worked to memorize his lines, he found his light, took a deep breath and then stopped. He began to rock back and forth, stimming. His hand kept going to his forehead and then down to his sides where he would shake his hands. Multiple times he began to recite his lines but couldn’t make the words form. The instructors gave him permission to take his time. Noticeably upset, he finally said, “I am so frustrated. And I don’t know why. I think I need a break.” He was escorted off the stage to the dressing room. The cast continued on without missing a beat. Someone read Ginger’s lines in Billy’s absence. About five minutes later, Billy walked back on stage and picked up right where the cast was in the show. I couldn’t help but think what a great skill Billy had developed. How many times have I found myself in a situation of high stress and pressure and did not allow myself to acknowledge the frustration I was feeling and offer myself permission to take a short break to collect myself?  How well would this skill translate to every child?

From learning to keep eye contact, to taking turns in speech patterns, the theatre helps to develop social skills that are commonly delayed in ASD children. Within the performance of dialog, autistic children get to practice holding a conversation with another person without the stress of thinking of what topics of conversation are appropriate.  Speech patterns and transferring times to talk are skills practiced through non-threating games and exercises commonly used in a theatre setting. Not only are the campers encouraged to practice speaking, but active listening, as well.

“Theatre, especially when adapted for those with autism offers: 1.) the structure of a supportive environment, 2.) instructional strategies that support positive outcomes, and 3.) self-affirming “rewards” for individual effort (accepted and applauded for uniqueness; not required to meet a standard. writes Robin Bennett, an instructor at a theatre therapy program at 4th Wall Theatre.

“I am ready to eat,” Timmy exclaimed to no one in particular as he walked off the stage and threw himself onto a seat. Meaghan Ritchie walked off the stage as well, but in the opposite direction, to a table covered in supplies. She picked up a laminated sheet up paper with two Velcro squares in the center. She then picked up two small squares, one with a picture of a lunch, the other with a picture of children on stage. She walked over to Timmy and showed him the squares. “First we will finish rehearsal,” she said placing the corresponding picture on the first Velcro patch, “and then we will eat lunch.” As she placed the food picture on the second Velcro patch, she handed Timmy the paper. He took it into his hand and walked back on stage. Holding the paper, he stood in his assigned spot without moving, content with the plan now in place.

The campers with ASD diagnosis shared the stage with neuro typical children who perform alongside them. “The children on the spectrum working along with children who do not have the same challenges offers them an opportunity to see and mimic communication and interaction,” Ritchie shared. The theatre is a breeding ground for friendship. The cooperation, accepted rule following, and creative integration required onstage leads to a bond between the participants. This was clearly the case during camp. All the kids worked together, learning from each other, building the story that was presented on Friday night.

Jonesy and I joined parents, friends and family members of the campers for their performance of the show. Dressed in camp t-shirts and hats that served as costuming and character recognition, tactile concerns and challenges were avoided. The actors performed their show with confidence to an adoring and appreciative audience. Many memorized their lines within the week, others using scripts to tell the story. As the show concluded, the actors lined up, took each other’s hands and took a bow to a standing ovation. Each actor then received a certificate of completion of camp. Enjoying the attention of an audience, several insisted on telling jokes before being dismissed.

Public Theatre of Kentucky will continue presenting this therapy camp during spring break. To donate to this special program or to learn more about participating, be sure to reach out to Artistic Director, Amber Turner, at ptkby.org. 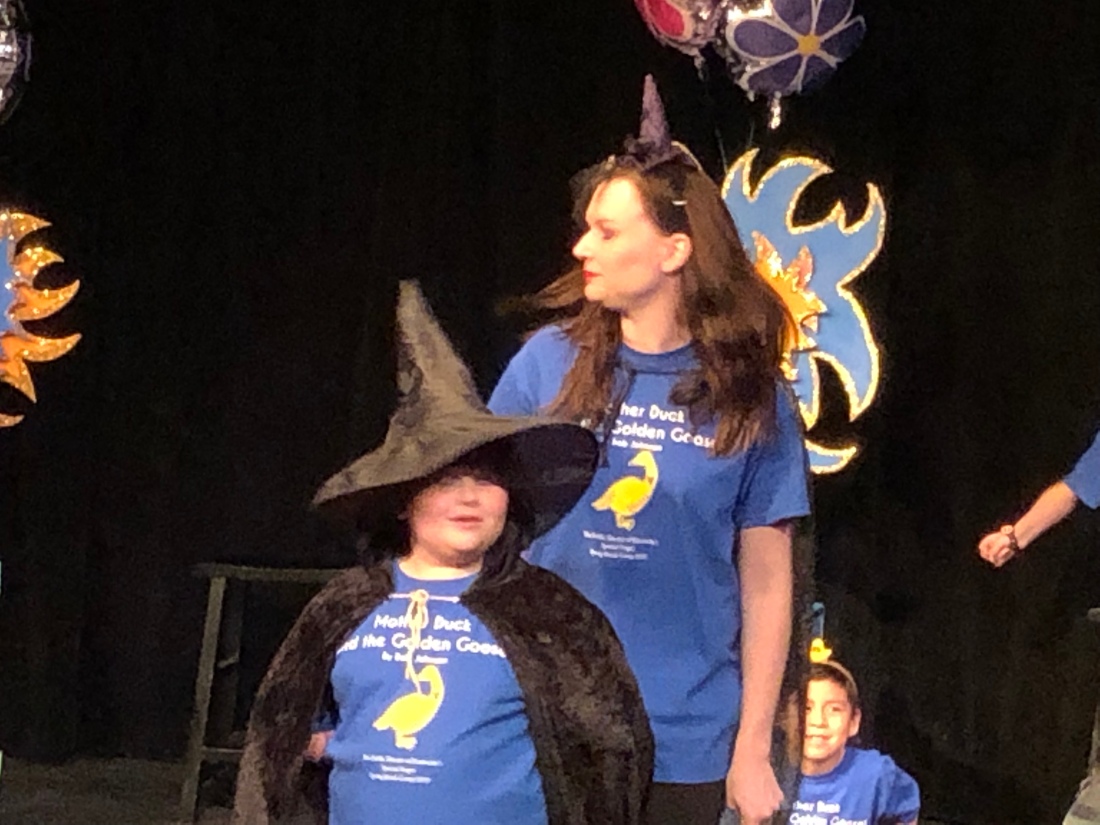