It is one of my favorite things in the world to travel to New York City. For a week  to live in the hustle and bustle of the city reminds me of how very different the American experience is for my friends there than mine in Kentucky. It is what compels me to visit. It is what makes me glad to leave and head back home. In the vast complexities of a country the size of America, it is with great wisdom, our Founding Fathers placed checks and balances, not only to protect us from tyranny, but also the ever changing mood of a populous. From the very start, the realization that life in New York would be very different than life in a smaller southern state, and for equal representation and to issue balance, if there would be a federal government,  an entity like the electoral college would need to be placed to be sure that the little guy, like Rhode Island, could not be run over by the big, powerful, wealthy guy, New York. Don’t you love Political Science and the inherent contradictions you find with in it? Currently the political party who claims to champion the little guy is pushing for the end of the very institution that was placed to protect the little guy.  One of the first things you learn in American political history is the majority of our Founding Fathers did not believe in a true popular vote democracy. The founding arguments of state sovereignty and fear of federal overreach are as much a part of our political ethos today as in the latter part of the 18th century.  The difference is that there is a nationalism, even those who oppose nationalism, cannot deny.

My conservative tendencies are founded in the principles of a small federal government. It is the lens through which my political philosophies are founded. I readily admit the bias. I hypothesize the American experiment has its best chance of success when the States are sovereign, and the Federal government is limited in its powers. It, in my estimation, is the only long-term way for a country the size and diversity of The United States of America to maintain real unity and longevity. It is outside my scope of understanding why the Federal Government has its hands in so much, it is so fully incapable of handling well, especially with the indisputable knowledge of what is most needed in Kansas is the least needed in California. Each state, with her own specialized needs, environments, philosophies and values making decisions for herself makes the most sense. The people of Virginia should have no say as to how the people of Florida are educating their children.

In 2019, there has been a full demonstration of what it looks like for the parts of a unified country to flex the muscles of state sovereignty. In January, the state of New York passed into law the Reproductive Health Act. The elected representatives of the State of New York, founded for themselves a piece of legislation, which in theory, represents the wishes of their state.  While I abhor every idea of that Bill, I am not a citizen of New York State. My voice does not need to be heard in New York State.  In this same year, the State of Kentucky has passed a law restricting abortion by banning the procedure after heartbeat detection and for the reason of ending a pregnancy due to gender, race or disability of the child. This law is being challenged today in Federal court.  By principle, I must support New York’s sovereign authority to pass what I consider an amoral legal decision for her citizenry. By principle, I have expectation that if the citizens of Kentucky make a decision for themselves, the voice of New York will be silenced.

At the risk of sounding alarmist, the Progressive agenda is not about representation of the people. This is evident in this new push to eliminate the electoral college. Instead the agenda is about winning. It is about pushing through ideas that are not good for, nor wanted by half of the country. And if it means dismantling proven checks and balances to win, then so be it. 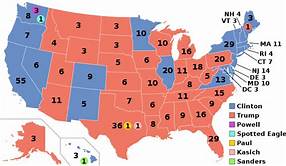 If these rules and principles are dismantled in order to ensure a win for the Progressives, and they still fail to achieve their agenda, there will be another institution to tear down, another balancing force to destroy, despite the voting voice of the whole.