In recent, separate conversations with my Gen Z daughters, I asked them this question: If you were to have but one political platform you feel very passionate about, what platform would you choose? Both answered: Gun Control.

My children have been brought up in a world where school shootings have peppered the news. Added to the massacres at the school, there have been mass shootings at concerts, churches, public buildings, parks—all the places young people go and spend time.  As I pursued the reasoning for their chosen platform, it began to dawn on me the impact these shootings have had on the personal safety and comfort of my girls.  The places they want to go and feel safe are featured in news stories where gunmen came in shooting, killing and maiming. I don’t find it surprising they have concerns about their safety and how the Second Amendment should be interpreted in our culture

I did not come from a gun family. We were not taught how to shoot guns, nor were we indoctrinated in the Second Amendment. My Mom really did not want guns in our home while we were small, and I think my Dad honored that request. I honestly don’t know. That is how insignificant guns were in my life.  I shot my first gun while in college. I joined a group of friends on a camping trip to a family farm where we shot cans off logs with handguns. Later in my college career, I dated a boy who liked to “walk his gun” around his property. He would hunt, but I can not recall a time in walks,  where I was present, the gun was ever shot. It might have been his way of respecting my lack of desire to shoot. I share this history mainly to reveal that my ideas about the Second Amendment have not been formed from a history of being a gun person. Pretty much it is the opposite.

At the beginning of our country, as the Federalist and Anti-Federalist duked it out for what our union was going to look like, these shared ideas of arming the populace were held by both sides: The Constitution was going to give the federal government almost total control of the army and militia. The federal government would have no authority to disarm the citizens.  In the heated debates which were argued over the amount of power the federal government would hold, the Second Amendment was not a contention. It might be the only time in history the populace was not divided in the gun issue. There was almost unanimous agreement that the government should not and could not have the power to infringe on the rights of the people to keep and bear arms.  The idea was that State Militia, ordinary citizens armed, could be called together as needed to protect. The problem was the Federalists and the Constitutional Convention gave the Federal Government a large dose of authority over not only a wartime military and militia, but also peacetime armies. It did not take long for the Federal Military to be powerful enough to make it naive to think everyday citizens and their weapons would be a match against the federal military. Historically, proponents of the Second Amendment will go back and reiterate the original purposes of the Second Amendment, protecting the citizens of the Union from a overbearing, tyrannical federal government. Some will point to the gun collections of the Nazi regimes and how that impacted the citizens who were dis-empowered against Hitler’s forces. It is my guess, however, that the majority of American Citizens do not fear federal tyranny. More importantly, there is not much room to hold the belief that armed citizens would overpower the United States Military.  As Macy asked in our discussion, “So should the average citizen have nuclear capability because the federal government does? It no longer makes sense for the average citizen to have the weapons the military does.”

As is appropriate, the Second Amendment has morphed from its original intention of militia protections and now is used as a standard more in line with protection of the arms used for self-protection against other citizens, as well as for hunting and sports/recreation. The natural question for the Second Amendment is just how absolute is the law? From its inception, there was not absolutism in the practice of the Second Amendment. There was no presumption of every man being given the Second Amendment right to bear arms. Even while the language was open, the interpretation was limited. People of color were not given the implicit right to bear arms, nor were those deemed mentally compromised.  It is dishonest to state the Second Amendment was originally intended for all. As those calling for restrictions to current laws argue for limitations to who can own weapons, to be fair in opposition, there must be a concession to original intent, not all people were intended to be armed.

In 2008, the Supreme Court heard and adjudicated the individual citizen’s right to possess arms in District of Columbia vs. Heller. It is in this case there was a full disconnect of the Second Amendment and its prefatory purposes of freedom of organized militias and a turn to the more operative function of the Amendment ensuring the right of the people to keep and bear arms. Heller stated the Second Amendment guaranteed individual rights to own and bear legal arms for purposes fully disconnected from militia, and guaranteed the right for lawful uses of citizens for self-defense. In Scalia’s majority opinion he confirmed the Second Amendment is not absolute. It should not be interpreted that the Court was removing restrictions on long held regulations of who could bear arms. There are clear, uniformly conceded understanding that the mentally ill and felons are not protected by the Second Amendment. Scalia also confirmed this ruling observed the original intent for the arms being protected be those which were in common use for the time. This  “common use for protection” becomes interesting wording when weapons such as the AR-15 are being considered.

As I consider the protection of individual rights, I feel like I must also consider the importance of civil liberties the Second Amendment represents.

“In liberal theory, the right to self-defense is the most fundamental of all rights–far more basic than the guarantees of free speech, freedom of religion, jury trial, and due process of law. Thomas Hobbes, the founder of liberal theory, clearly stated the theoretical basis for this proposition:

THE RIGHT OF NATURE, which Writers commonly call Jus Naturale, is the Liberty each man hath, to use his own power, as he will himself, for the preservation of his own Nature; that is to say, of his own Life; and consequently, of doing anything, which in his own Judgment, and Reason, he shall conceive to be the aptest means thereunto. ….

A LAW OF NATURE, (Lex Naturalis) is a Precept, or general Rule, found out by Reason, by which a man is forbidden to do, that, which is destructive of his life, or takes away the means of preserving the same; and to omit, that, by which he thinks it may be best preserved. “ (Nelson Lund, Alabama Law Review)

Because I believe in personal liberty, I believe in the protections of the Second Amendment. However, that belief is tempered by the submission to a social contract where my own personal liberties are voluntarily limited for the greater good of society. Just as the Founding Fathers took to debate on the ins and outs of the limits of that social contract and how government would be limited in its authority, I believe the current populace must come to an agreeable compromise. The outlying political extremes must be centralized to an agreement where the rights of nature are married to common sense ideas of what is best for the whole. I do not see the intent of the Second Amendment being compromised by placing appropriate regulations on the sell and ownership of guns. I do not find it a limit of rights to require training, licensing, background checks, nor waiting periods for the purchase of weapons. I do not find it in violation of the intent of the amendment to restrict the rights to those who are mentally incompetent and who have violated the social contract through felonious actions.  I believe the legal precedent set in cases like Heller, give room for restrictions of personal ownership of weapons which do not fall into the “common use for protection” category.  Mostly, I do not believe it serves our rights as citizens to live in the extremes. To set up common sense regulations of guns does not equate to disarming the populace. Nor, does protecting law abiding citizen’s rights to bear arms equate to mass shootings.

Macy and Molly, as you search for your place in the political spectrum, I want you to hear this above all else: political intelligence does not require you to take a side, blindly. There is no team you must join, although the current political environment says that is the way to participate in the game. You can be a proponent for the rights afforded to you through God and confirmed by the Founding Fathers, while still questioning the interpretation of those rights in view of the greater good for the general population.  I want you to pursue understanding of both sides of the arguments, find places you can compromise and stand with conviction in the places you feel unmovable.  Keep thinking. Keep passionately pursuing understanding.  I appreciate your desire to pursue the greater good. 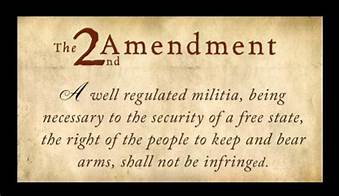 One thought on “My Daughters and Guns”